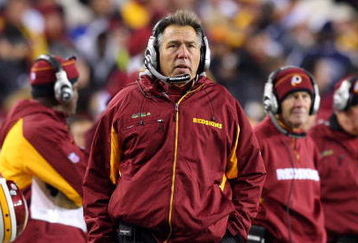 Alright, the preseason is finally over, and now the real fun begins. This Sunday, the Washington Redskins opened the 2009 season on the road versus the New York Giants. Most of the national media has the redskins going 8-8 or worse, but some have them being a sleeper team or a super bowl team believe it or not. As the season inches closer let's take a look at the schedule, some of the biggest story lines this season, and my predictions for the regular season (IN BOLD) as well.

The good news is that the skins have a favorable schedule after week one. The bad news is that the wide receiving core is young, but unproven, the Offensive Line is aging and we could easily see some several key injuries in that area. This will lead to Jason Campbell being sacked more often, and Clinton Portis struggling to find holes in the run game. If the O-Line stays healthy, and Malcolm Kelly steps up this season, look for Campbell and Portis to have a breakout season.

As for the defense, I think its a gonna take a step back despite signing Albert Haynesworth. The defense never gets a stop when needed most in the 4th quarter, and they do not score points off turnovers. They play well for like 45 minutes, and collapse in the final 15. If the Redskins can play a full 60 minute game on defense, and score points on defense, then this team will become a playoff dark horse in the NFC.

Head Coach Jim Zorn on the hot seat: It's now or never for coach Zorn. A playoff appearance and possibly a postseason win will save Zorn's job in DC next season.

Quarterback Jason Campbell: Campbell handled the Jay Cutler and Mark Sanchez trade rumors very well. But he has to prove to the ownership and the fans that he is a proven franchise quarterback. This league is quarterback driven and if the team struggles, then Campbell will be the main fallout.

Albert Haynesworth: Will the $100 million dollar man improve the Defensive Line. More importantly can he stay healthy for a full season, something he hasn't done since his rookie season.

Zorn and Portis: With Ladell Betts being the primary 3rd down back, Clinton Portis workload will slightly diminish and should be more fresh during the 2nd half of the season. However, if the redskins struggle to convert third downs this season and Portis becomes angry about it, this will raise questions about the relationship between the star running back and head coach.
Posted by YasinJ